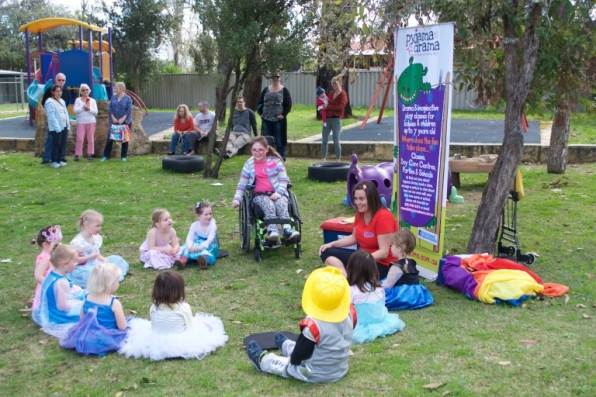 A princess adventure in Perth

“Is it my party yet, mumma? When is it my paaarty?”

To say that Ada was excited in the lead up to her third birthday party would be a gross and misleading understatement. For many, many months, the bedtime routine involved an in-depth discussion about the seemingly endless options for presents, cakes, and costumes. And she just couldn’t make up her mind.

From Tinkerbell to Minnie Mouse, Dory to Ninja Turtles, we were no closer to choosing a theme only a few weeks out from the big day. We were close, however, to wearing a hole in BIG W’s party aisle.

It was time to call in the big guns from Perth-based Pyjama Drama, a company dedicated to the benefits of drama, movement, music and play, also passionate about kids birthday parties in Perth, and with a BIG IMAGINATION. A drama party, it seemed, was just what we were looking for.

I sent the SOS to Amanda Plumridge from Pyjama Drama late one Sunday evening:

“Amanda, please, you’ve got to help! Ada wants a dragon hunt, Mummy wants a princess party, Daddy says a jungle adventure would be cool, while Ada’s sister, Eve, loves silly clowns. What are we going to do?”

The response was almost immediate:

“No problem. We can do a tailor-made party with princesses, searching in the jungle for a dancing dragon. Incorporating clowns could be a little tricky, but I’m sure there is a way!”

I breathed a sigh of relief, but then:

“But what do I do about invites?”
“Don’t worry. I’ll drop some off for you tomorrow.”

What service! It was going to be a fantastic birthday party....

As the mums and dads looked on in anticipation, ten little princesses (plus one very shiny robot brother) sat quietly in a circle on the grass. For the most part, the children were aged between 2 and 4 years old, but Pyjama Drama parties can cater for all ages. Some of the princess participants eagerly awaited the adventure ahead, chatting in whispers to their friends; some were simply happy swaying to the Pyjama Drama soundtrack that was playing on the speakers.

The adventure kicked off with a sing-a-long session and a box full of colourful instruments. The enthusiasm of Amanda from Pyjama Drama was captivating, and within minutes, the kids came alive, joining in the actions, dancing to the music, laughing at the jokes, and completely engrossed in every move she made. Every child was invested in the mission to find the dancing dragon, and the adventure was as real to them as the sunshine through the trees.

What was fascinating to see was that the activity wasn’t rigid. At any moment, the children could change the direction of the story, and this was all part of the fun. You could almost see the cogs turning in their brains as they decided which path to take to the cave of the fire-breathing dragon. They finally opted to crawl through the play tunnel, and there was lots of laughter as they all tumbled out the end.

There were some natural leaders, of course, while some preferred to follow. Whatever level of participation, with which the children felt comfortable, was just fine with Amanda. She made every child feel welcome, even the robot!

One little girl went so far as to swap from her role as a princess to the role of the dancing dragon, relishing the drama as she hid from her friends and then led the ‘Dragon Boogie’. Satin dresses twirled and whirled across the grass to the music, as the children jumped, danced and giggled. It really was beautiful to watch, and Princess Ada glowed with happiness.

Fifty minutes flew past so quickly, and when the adventure ended, they were all ready for a little nap in the grass. But there wasn’t much time to spare before they had to put on their thinking faces and recap what they’d experienced. Amanda asked the children questions to prompt their memories and provoke thought, also promising them certificates for a job well done.

I would highly recommend a Pyjama Drama party for those parents seeking something a little different in their search for kids birthday parties in Perth. It would also be great for those that might like to step back a little and let a professional handle the kids, or for those that simply appreciate the value of imagination, play, and movement for a child’s good health and well-being.

It’s also great for those – like us — that can’t make up their mind...

Posted in Classes By Pyjama Drama