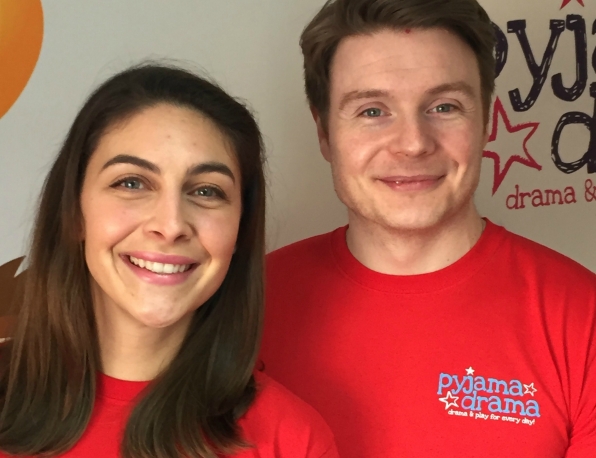 Anthony and Ana-Maria are both experienced actors, are engaged to be married this coming autumn and have recently combined their passion for drama and working with young children to go into business together running a Pyjama Drama franchise in the Guildford and Surrey Hills area. With so many changes on the horizon, and 2017 set to be a year of huge change, we wanted to find out more about this dynamic duo...

About their acting experience..
Anthony and Ana-Maria both trained at Royal Welsh College of Music and Drama. Anthony has had parts in various TV shows including Emmerdale, Misfits and Trollied, and has helped create a theatre company, "NOT TOO TAME" which brings shows to communities that don't have experience of/ or access to the theatre. Since leaving drama school Ana-Maria has worked across all parts of the industry, her credits include working at the National Theatre, London and a guest lead on a BBC crime Drama.

Where they met..
Ana-Maria met after she'd seen Anthony perform in a show in London.

Why did they chose Pyjama Drama?
Ana- Maria had experience working for Pyjama Drama in a neighbouring franchise and was inspired by the way the children reacted to the classes. After telling Anthony about her days at work, they felt it was something they could bring their skills to and make it a success in their own area.

Do they think working and living together will be challenging?
The main difficulty will be sticking to office hours and also making sure there is some down time apart.- the gym and yoga work wonders for this!

What each will bring to the business partnership...

Anthony: 'Ana-Maria will bring her highly organised nature to the business, her teaching experience and her energy and warmth. Watching the children fall in love with Ana-Maria in the class is a very magical and motivational thing to see.'

Ana-Maria: 'Anthony will bring his calm and thoughtful problem solving as well as his attitude that anything is possible. He also has a very natural and engaging quality with the children and of course, the fact that he is a man, in an industry predominantly made up of women, gives us something unique.'

And how will planning a wedding fit in with starting a new business?
Anthony: 'Ana-Maria's planning has been put to the test, there are files, folders and flip charts all over the place but we both feel very positive about it. We've had to be decisive with wedding arrangements and have called in a lot of favours, but so far things are going well. And if it does all feel a bit too much the thought of a honeymoon on the beach gets us through it!'

Classes for children up to five years starting on Thursday afternoons at The Spike Community Centre, Guildford and Saturday mornings at St John’s, The Stirling Centre, Stoke, Guildford. Get in touch to book a class or find out more about Pyjama Drama in Guildford!

Posted in Work By Pyjama Drama